Write Your Book in 90 Days

But what if writing a book is SIMPLER and FASTER than you ever thought?
​

What if writing a book isn't so much about "crafting the perfect opus" and just about getting that first draft DONE?

​>> With the right strategy, guidance, and time commitment, you CAN write that book in 90 days.

Proof it is possible: Here are some people who did it 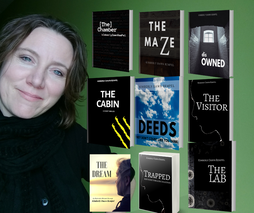 You might be thinking, "pfft. yeah right." And that's fair. The internet is full of strangers making empty promises. So let me show you a few people - some I know, some I know of - who have accomplished just such a task.

Me. I wrote my thriller, Disowned, in three weeks at a pace of about 3 hours per week. This 10,000-word novella was released two short months later and received fantastic reviews from my readers.

One of my coaching clients, who finished her collection of devotionals in 3 months. When she started, she wondered how long it would take her, and ended with a sense of surprise and awe about how quickly the book came together. I love it when authors surprise themselves. (it happens a lot)

An author friend of mine, put together a novella-size book in 3 weeks. She confessed later it was an exercise in procrastination, distracting her from other work she "should" have been doing. That book was quickly edited and published, and she turned her attention to the previously avoided work.

NaNoWriMo writers challenge themselves to write an entire novel from idea to complete first draft in 30 days in this annual contest, National Novel Writing Month..They write a book in a single month! I know a number of authors personally who took up that challenge and either completed their first draft or got closer than they ever imagined was possible.

Write Your Book in 90 Days

Time Investment =  2+ hours weekly
One hour-long group coaching session per week
One hour (minimum) of writing each week, done on your own or with the group in weekly writing sessions.

Schedule:
The next intensive runs January - March, 2023 (specific dates TBA - will be determined according to schedules of sign-ups)
​Weekly sessions happen during the day over the lunch hour (12:00 CST on a weekday) to accommodate work schedules
Writing sessions are available on weekday mornings (10-11:30CST), and an evening session will be made available as well.